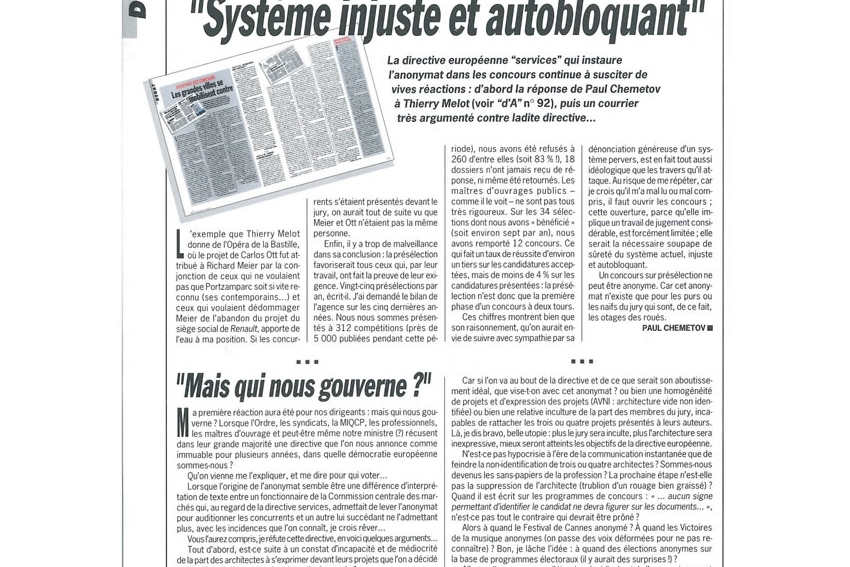 My initial reaction has been towards our leaders : who governs us? When the Order of the Architects, the trade unions, the professionals, the owners and perhaps even our minister (?) challenge, in their great majority, a European directive that is announced as unchangeable for several years, what European democracy are we in?

When the origin of anonymity seems to be a difference in interpretation between a civil servant of the markets’ central commission who, interpreting the directive of the services, decides to lift the anonymity to interview the competitors and his successor deciding not to lift it, with the effects that one knows, I think I dream…

You will have understood, I refute this directive, here are some arguments…

First of all, is it following an admission of failure and mediocrity on the ability of the architects to express themselves about their projects that we decided to forbid them to speak?

No, I suppose that the directive aims at correcting the attitude of a bad jury which would have preferences from the start for such or such architect before even knowing his proposal. Making the architects within a contest anonymous would therefore validate the incompetence of a jury? But it is true that we are in times when we answer bad motorists by cutting mature trees…

Because if one goes to the end of the directive and what would be its ideal result, what is the aim of this anonymity? Either a homogeneity of projects and expression of projects or a relative ignorance on the part of the members of the jury, unable to associate with their authors the three or four projects presented.

Here I say bravo, beautiful dream, the more the jury will be uncultivated, the more the architecture will be inexpressive, and the better the goals of the European directive will be achieved.

Isn’t this hypocrisy in an era of instantaneous communication to pretend not to know three or four architects? Have we become the undocumented migrants of the profession? Will the next stage be the removal of the architect (troublemaker of a well lubricated system)?

When it is written on the contests’ programs : “… no sign making it possible to identify the candidate shall be reproduced on the documents…” is it not just the opposite that should be recommended?

When shall appear the anonymous Cannes festival? the anonymous "Victoires de la musique" (voices are deformed not to be recognized)? OK, forget that idea. But, what about anonymous elections based on the election programs (there would be surprises !)?

Let us measure the extent of the ridiculous cultural impoverishment which we generate before it swallows us. Where is the limit of the distinguishing feature between the individual, his presence, his voice, his signature, his stroke? In this case only stupidity is a distinctive sign.

My advice to finish: in project contests, you might want to show your name in big letters on the façades of your projects!