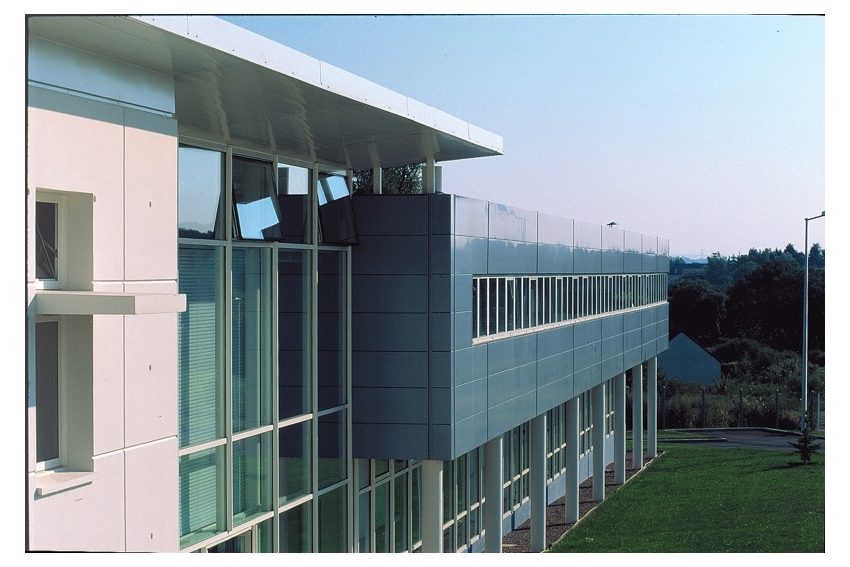 My first direct large order. I was 32, for this reason, one can thank the client initiative. The project emerged from a rich dialogue about the program and the main plan.

The higher intentions have remained, even if the project has undergone some changes which have focused on a constant optimisation of the surfaces (3 or 4 projects redone). The 80 m south-west façade has resisted a volume fragmentation (an idea from the outside, not adopted), the inclined walls have found their place, as well as the colour blue...

Having no experience of a personal production of this magnitude, I discovered, along with the client, the nature of the project, rather refined in the light of my childhood impression of self built tests of the 70’s .. .

It is a private commission, funded in part by public money. The challenge was to put in the same space two separate and complementary programs around training : an adult vocational training centre (AFPI) and an industrial training and apprenticeship centre (CFAI).

The Afpi would include classrooms and an administration part. The CFAI had the same requirements with added industrial workshops (welding, maintenance), specialised rooms and a restaurant.

Both sides receiving different audiences, they should be able to operate independently. An amphitheatre that could be used in common was required.

The project is located in the western outskirts of Nevers, at the time the last undeveloped areas of the city. The sector includes commercial (supermarkets), and services activities, housing and the Hospital ...

The building is located on a plateau that stretches in a gentle slope towards the town in the North East. This vast plateau is the origin of the horizontal lines of the building : they outline its extent and prolong it.

The "T" shape plan has generated the two autonomous areas requested, using each of two ways to independently access the Afpi and CFAI.

The building follows the land : the CFAI is located on a contour and the Afpi, perpendicular to it, marks the declivity on piles whose height increases with slope. The horizontal roofs repeat this with an exchange of heights (and volumes) above the Afpi lobby.

The various components of the program have been strongly developed in conjunction with the site specifications : giving onto the south-east crossroads, the all-glass maintenance workshop shows the industrial activity ; to the north-east, the cafeteria protrudes in an overhang and reveals the city centre, whilst the Afpi lobby gives a glimpse of the landscaped park ...

The building has two wings. An extrovert one, the Afpi (training and communication), shows to the outside, in a glass arcade, its circulation and communal areas (ground level). The other one, introvert, the CFAI (industrial apprenticeship), reveals the inside of the building in a second step : after an approach from the outside of the building and its clean lines, a spatial "surprise" is created inside, by the discovery of the industry belly, with its slanted walls catching the light, its gangways, its translucent roof.

The building and its façades are the result of a "natural" management of light and sun, collected and distributed differently according to spaces, exhibitions, times of day or night :

Because of the industrial environment, the dominant material is metal. This material also allowed to cope with the tight budget of 750 € HT/m2. The façade work has focused on the differentiation of textures. A weatherboard with horizontal waves dresses the CFAI, a flat weatherboard equips the Afpi. Inside, the ceiling metal plates are enamelled and perforated for the classrooms (acoustic), they are left in galvanised steel in the workshops.

The structure’s typology has been studied with the purpose of the premises in mind. The vertical framing and the floor beams are concrete in the teaching areas and in the administration, with metallic roofing beams in fine wire mesh. The frame is entirely made of metal in the industrial workshops, with IPE beams .

The amphitheatre block is made of poured concrete and is immediately followed by the glass hall. This tension is deliberately created there to pinpoint the heart of the project. It crystallizes the origin of the materials used. The stone block and the glass block generate the surrounding metal.

To view the plans in pdf format click this icon :