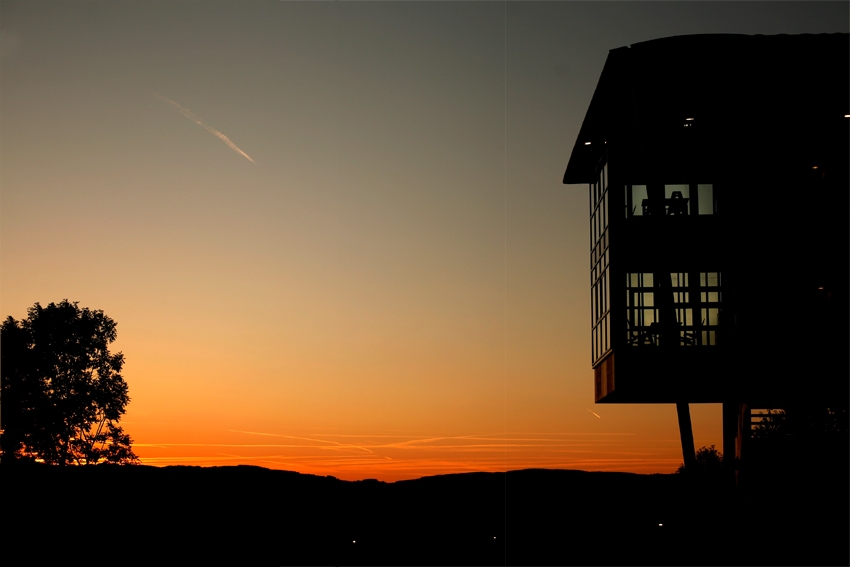 The project involves the extension of a boarding building designed 10 years ago by the architectural agency Arkédif, for the agricultural college.

The land allocated to the project has a steep slope at its north-east end and beautiful views of Chateau Chinon and the Morvan.

During the contest which the project was the subject of, I had to face two important decisions :

The project is developed along a curve initiated by the existing building. It asserts it and continues it. The curve allows to connect the two buildings with a volume unicity that gives a new scale (greater) to the whole building. It is then positioned on the site in agreement with the central building of the school and avoids the effect of a large nucleus surrounded by small satellites.

This direct connection from volume to volume also provides an efficient and economic link between the boarding areas while avoiding vis-à-vis which is not desirable in a boarding building.

The double inflection of the curve opens the composition of an assemblage that would have been too "hard" if it had been drawn with a single arc, and allows to manage, without monotony, an 85 meters long "line". This double inflection recalls the idea of a contour line which stretches freely in the landscape.

In addition, accidents (loggias) and specific treatments at the ends (the glass hall, the suspended tea room) tell a story about the façades from the outside and give a landscape reading from the inside ....

Gradually from west to east the building juts above the drop and the panoramic views of the Morvan reveal themselves.

The two upper levels are at a fixed height, in conjunction with the levels of the existing boarding part.

The ground level descends gradually eastward accompanying the natural slope with a break in level for each independent part :

From the infirmary, the poles height increases with the slope by accompanying the difference in height. The tension created by the slope has found its remedy in the northern gable with a tea room overhanging above the drop and the outside staircase that goes with it.

A logical handling of the façades has been developed based on the degree of weathering. Thus we find successively the following materials, from the most exposed (façades) to the most protected (set back from the façades) : zinc (including roof), plaster, wood panels, glass.

The treatment of the wooded façades refers to a wooded background and gives a more "sensitive" character to the students façades (as opposed to pure housing). Similarly, the volume of the tea room, dressed in wood panels in its lower part, may picture a cabin suspended in the emptiness.

Planned for 4 boarders, the bedrooms are designed with 4 separate sub-spaces as if there were four small bedrooms inside the big one. So each boarder has a window with a private space which is visually protected from the others by the arrangement of furniture.

This concept of individual spaces has proved important for boarders who live all week in public areas.

The corridors are intersected by balconies that let in natural light and offer intermediary small sitting-rooms off the bedrooms which give onto the scenic highlights of Chateau-Chinon and the Morvan mountains. The tea-room at the end opens onto a panoramic view.

Some of the work achieved during the operation :