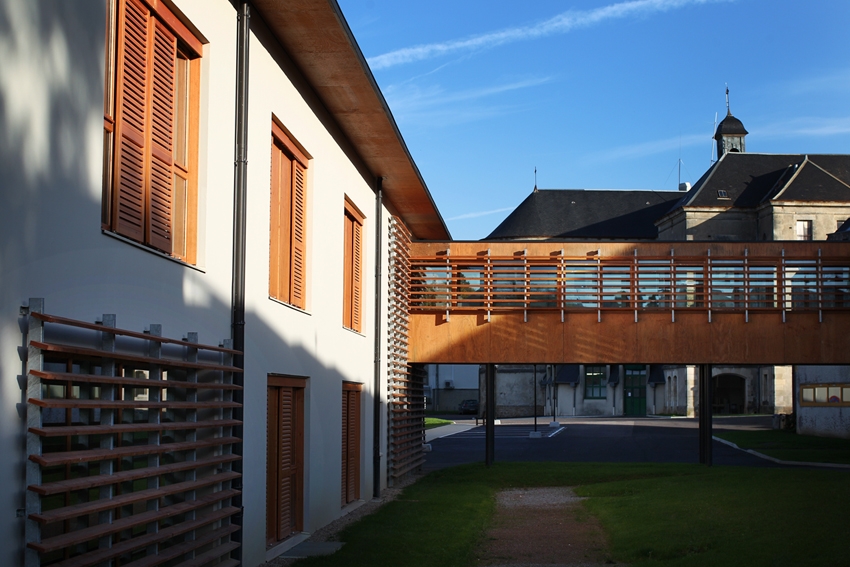 EHPAD: Accommodation for dependent elderly people near their end of life needing assistance and nursing.

The contest was to produce two living units,

"The patient at the heart of the project"

The client wanted to put residents at the heart of the system: everything in the project led to it. One of the first concepts we developed was to create added value to the living spaces around the bedroom. The building, beyond its high functionality becomes a place of interest, relaxing and inciting orientation for the resident. The resident is not "compelled" to his bedroom but is invited to use the circulation areas as places to walk.

For this, the bedrooms are arranged around two interior patios. Residents as they leave their bedroom have glazed circulation areas, overlooking landscaped patios. This profoundly changes the traditional organisation "artificially-lit-corridor-distributing-the-bedrooms-either-side". Here the resident is not only invited to walk but people with Alzheimer’s can move freely around the patios, space is at the service of the diseased, it becomes a therapeutic element in itself. A gradual path is established from the intimate (bedroom), to the outside (patio, terrace or even the therapeutic garden that extends the project).

The first floor benefiting from a lesser built area, a hanging garden was created to allow an outdoor stroll overlooking the city and the environment.

One of the project’s strong concepts was to introduce "freedom felt" secure areas. Indeed in most institutions the resident life is confined to the interior spaces. Here patios and terraces offer outdoor extensions to living spaces: living rooms and dining rooms extend onto wooden terraces in the shade of generous sunscreens ...

At the origin of the Hospital Complex is the Aligre building, built in 1872 and characterised by its chapel. Since, added buildings were gradually developed with different styles without any unifying scheme to regulate these successive extensions.

Not wishing to add yet another style to the already eclectic site, we opted for a quiet and relaxing architecture: two large volumes extended by two overhanging roofs take place smoothly into the site.

The hospital central space remains open: by placing the ground floor unit on the north side of the project, the heart of the establishment remains visually clear from the JM Thevenin street.

Wood was preferred for all exterior joineries, including louvered sliding shutters, and sunscreens. The architects wanted to come close to a sensitivity that changes from the usually sterile hospital world. Inside one also finds some Japanese ambiance ... a coincidence? (the team of architects partnered on this project after a trip to Japan).

Link to the inauguration video