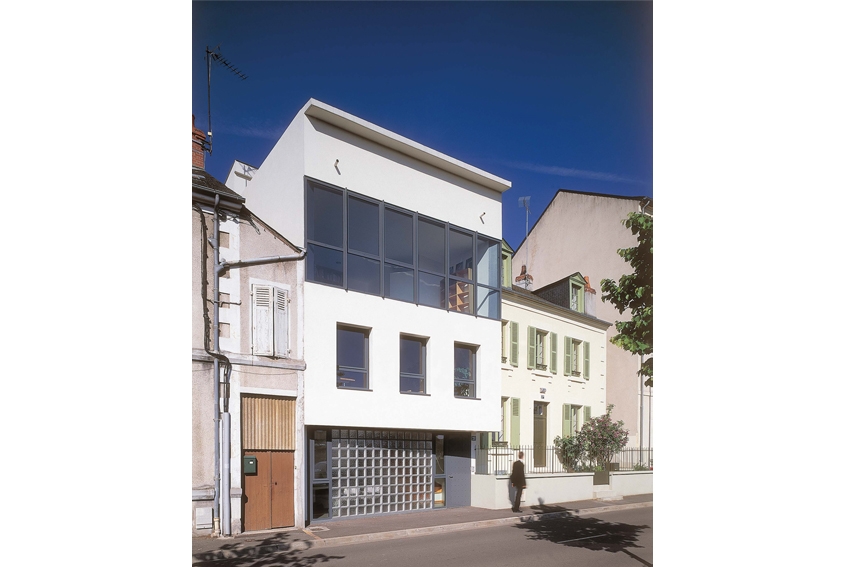 When I left the School of Architecture of Marseille, I came to Nevers by chance, I met Maryline (my wife) and we bought a 1930’s house without facing neighbours, overlooking the railway wasteland and the city beyond.

I fell in love with this house : a ground floor where to put a (small) agency, a courtyard for children and upstairs, the possibility to settle our home.

Twelve years later, the space had become too small, comprehensive restructuring was then proposed to allocate the entire house to the family and to create a fully-fledged agency, adjacent to the house.

Given the need to live on site during the construction, a "drawer" operation was implemented:

1: Construction of the agency for a year next to the house,

2: shifting of the lower house to the top of the agency to carry out the work in the house for another year,

3: redeployment in the finished house.

It opens on a ground floor at street level (unlike the house which is 1m higher than the pavement) and spreads up with a half level lag compared to the house, which makes it possible to gain an inhabitable additional level while remaining within the existing urban pattern.

Each level of the agency houses a micro-project related to the life of the building and the external environment.

On the ground floor, street side, I wanted light without having a complete transparent commercial window like that of a butcher’s or a hairdresser’s : the glass blocks wall makes the reception area a luminous box whilst preserving visual intimacy.

On the courtyard side, 1.5 m under the natural ground, to prevent the meeting room from being completely transformed into a buried basement, a pond with glass walls provides the transition between the garden and the agency, populated with Loire fishes and filtering the outside light. Outside an arbour that can come apart makes it possible to shade the pond-aquarium (south west side) in the summer.

A slight withdrawal of the ground floor façade in the oblique alignment of the house, provides shelter to the entrance and asserts the overhanging higher levels. The front door, perforated with glass holes allows one to look in at the desired height.

The higher levels grow gradually with views onto the city and the sky.

Upstairs, the design studio opens onto a free space occupying the entire level. On the front side, three vertical windows are the only connection to neighbouring buildings and give the building a reference scale.

On the second floor, the view on the city takes all its dimensions with a bay window taking the whole width and height of the room. A Venetian blind which can fold in the beam allows to adjust the view, the intimacy and the light …

On the last level, a small attic room (almost too low - a recollection of a student room) set back from the street, with a zinc roof, gives onto a panoramic terrace without facing neighbours which allows us to sleep under the stars in the summer in the middle of Nevers (with or without a heat wave), or to have a coffee in the morning sun when the city wakes up.

A passage connects the top of the agency to the house.

Regarding concrete, we notice the efforts of the engineer (Pingat I2C) and the mason (Lavilla) to make the semi-buried pond, the stair openings without columns, the blind enclosure in the concrete beam on the third level, the high shelf of the street terrace that comes to complete the development of the building just like the low bench of the basin garden at the other end.

The floors are made of tinted concrete with hardener and surfaced with an helicopter (real industrial flooring at the price of PVC flooring). They integrate heating circuits.

Windows are aluminium on the street side and wooden on the garden side (with louvred shutters on the south west side).

The terrace is made with a waterproof multi-layer structure and paving slabs and the attic roof is made of zinc.

The glass + sealed part of the aquarium was made by a company of La Rochelle (Proviviers).

I have no authoritarian ecological will in my projects. I would say that they derive from a common sense and an appropriate design.

This project is no exception to the rule. For example during the heatwave of 2003 the whole family could sleep on the terrace at the top of the agency and we repeat frequently this custom every summer. Another example, the thermal mass of the water increased by a removable pergola regulate the temperature of the meeting room giving onto the south west façade : do we not have ecological reflexes there ?

Continuing with the history of the work, I also note that I asked the builder to ensure a continuity of the metallic frame and to ground it to avoid a magnetic field effect. I wanted to have my ceilings in traditional plaster to gain in height and avoid the systematic drywall. I used ecological paint, which takes longer to dry but has no odour and no harmful fumes. The soil is soft linoleum in the attic.

An ultimate ecological reflex, using the railing of the terrace of the agency for survival, here is an extract of the landscape paragraph of the building permit :

"... Finally, in case of serious crises that might affect the profession, the masonry railings of the terrace should be used to display the enormous, luminous and twinkling letters ARCHITECT visible from the night trains…"

See the article "Remodelling a home"