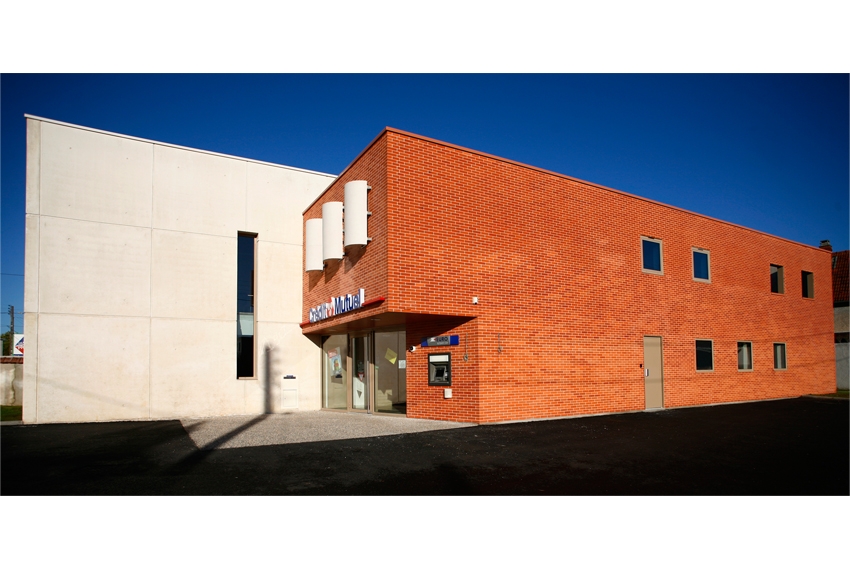 The project is situated near the outskirts of Nevers in a residential area of the 1930’s, composed of small houses with roofs made of interlocking tiles, and ornamented façades. The house next door is inspired by art nouveau, very well designed. The plot is at the corner of a crossroad, close to the former "Pittié" military barracks ... future home of the "Conseil Général".

The project is firstly composed of two volumes, shouldering one another, which symbolize for me the ideal of a bank’ spirit: support of their clients’ projects.

Here is an added interest of a project drawn into two volumes: the scaling of a 250m2 building, inserting finely its volume in the area, among existing buildings. We thus have placed the white volume at the front of the project, with its glass façade giving onto the street, in alignment and proportion with the surrounding houses.

Also, conveniently on this narrow plot, the frontal shift of volumes allows the entry of cars in a very advantageous way.

The project is positioned against all these constructions which want to be classy while being built in fake, which a breath would take away (see “The three little pigs”), and which age badly…

Here two noble materials, the white raw concrete and bricks (present in the district) mark the construction as durable. They position the building, and justify even the expression “to invest in bricks”!

On this subject nothing could have been possible without the personal involvement of JF Reichard (Ent. Morini) who adjusted the white concrete (a rare example in Nevers). Also let us greet the performance of Mr. Pautrat (Enduit Plus) and the knowledge of his company on the brick facing: such buildings require knowledge to make, it is what I invite to support.

I wanted to give a "surprise" to the customer who entered the bank : that of an indoor garden — the gem of the building. In my first version, a pool of clear water (now a plant pool) gave an opportunity to the satisfied customer to throw a coin and make a wish as is the tradition in some fountains in the South of France ...

The garden also illuminates naturally all the building circulation areas (the subject of natural light is decidedly recurring in my projects).

Go see the building at night (as well) !