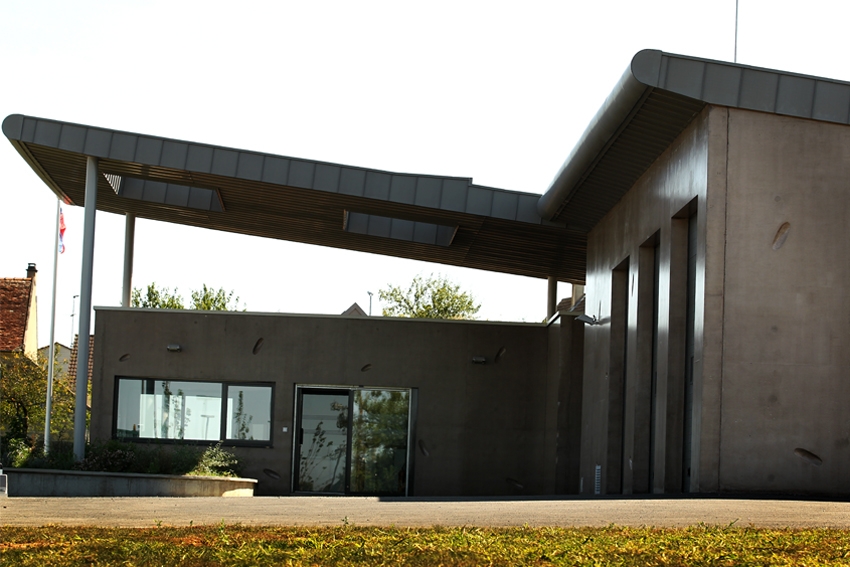 The project aims to be clear and functional. It separates the offices at the front of the project, giving onto the Commes street, from 11 lodgings at the rear, away from the public space. Each of these ensemble is served by a separate entrance, but one can go from the main entrance to the housing service road, through a lane under the awning.

This awning has several functions :

The two windows on the awning roof provide additional natural light and mark the entrance space.

From a functional point of view:

Regarding the volume: a high volume (awning), corresponding to the garages, goes with a low volume - administration (vegetated roof terrace). The garage receives the same treatment as the administration (same type of concrete wall and link via the awning).

The offices each have sunshades made of perforated metal sheet to avoid dazzlement from the West or the East. The facades are made of stained concrete. The wall surface has cavities shaped like shingle (reminder of the Loire nearby), this is obtained by resin molds placed in the formwork before casting.

Accommodations are voluntarily established with various sizes and are grouped according to different typologies (T3, T4, T5) for diversity and individualisation. They are grouped in pairs which saves space on the small plot, but they are interspersed with garages and gazebos to maintain their individual character. They all have a double orientation ENE WSW. They are characterized by garages set back from the street with the following benefits: