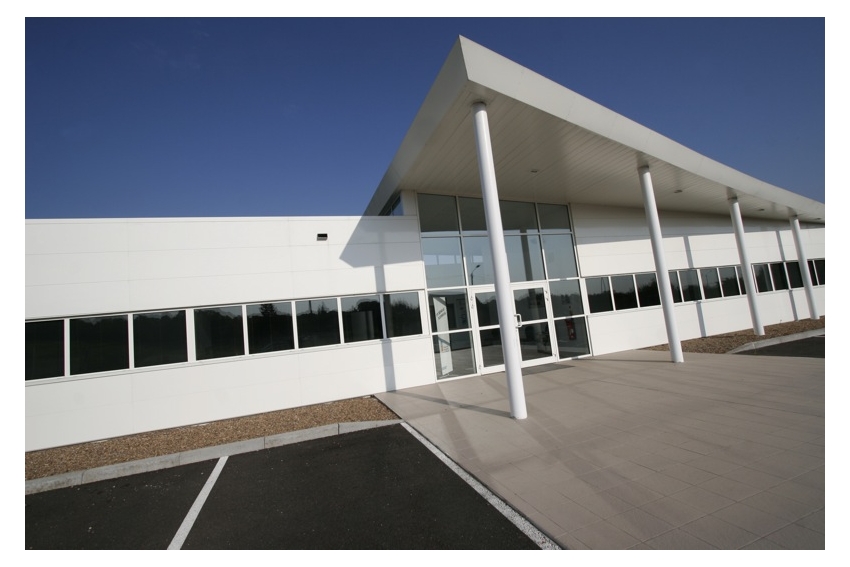 It is a low building of 300m2 on one level, in a commercial/services zone, near the ANIFOP (see presentation of this building also on this site) ; it hosts the headquarters of the "Union des Industries et des Métiers de la Métallurgie de la Nièvre" (UIMM). Anifop and UIMM are also linked by their administration board.

The project takes place in an expanding area (west of the new hospital) and particularly among buildings of a much larger scale. For this reason the project is built in the width of the parcel to maximize its perception from the Boulevard.

The building is characterized by an overall movement of roof, part of which rises gradually to form a porch roof above the entrance. This generates a roof gap allowing to throw natural light in all areas of circulation inside the building by following the path of the sun from east to west.

Outside, under the porch roof are tall poles , reminders of the Anifop’s piles.

In hindsight one can say that everything has been done to optimize the perception of a small building :

The final form has been found after repeated refusal from the owner on volumes always too expensive, until I presented a shoe box, in jest ! Later, during an afternoon, at nap time, after I had told myself that I could see nothing good coming out, I ventured into the movement of roof which gave birth to the project and was adopted as soon as presented.