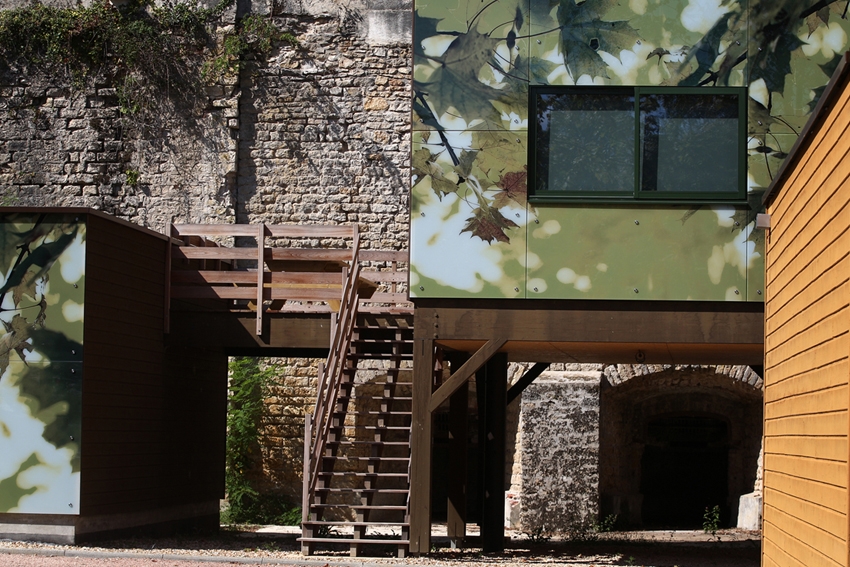 Thinking the present based on the past.

We are in Beffes in central France near the Loire, on a site rich with history and where the extraction of lime took place until the Second World War. For nearly fifty years the site remained abandoned and in 1990 it was bought by the town council for its re-development. The various remains then gave life to numerous projects including a bike-campsite in the grounds of the second lime production hall.

This bike-campsite project can accommodate cyclists who are increasingly numerous on the "Loire à Vélo » route between Nantes and Nevers. The project is designed to enhance the heritage and give a second life to this site, still fresh in the memory of the locals.

The shape of the bungalows is akin to the large stone blocks extracted from a quarry. They are arranged at different heights creating a dynamic in space, generating views, avoiding vis-à-vis, revealing the old kilns under the raised bungalows. The existing walls are preserved, restored and consolidated. The spaces created insert themselves between the walls: past and present value each other in a single composition.

All 11 buildings are wood frame based with workshop prefabricated panels assembled on site. The roofs are vegetated, they constitute a fifth facade visible from the bungalows situated above or from the top of the old quarry. The wood is treated with ocher colour from St Amand en Puisaye according to an ancient recipe, with a brown colour for accommodation bungalows and yellow ocher for public spaces (main desk, foyer, WC) The pinions of the accomodation bungalows are made of printed glass depicting giant leaves which blend the colours of the local foliage. This design allows occupants to accept the relative proximity of the buildings to each other.

Inside, colourful alcoves for sleeping or, for some bungalows, mezzanines with a view to the sky ...

The bungalows create a link between all the elements and provide a campsite with a look upon history: a cultural tourism, an industrial tourism!