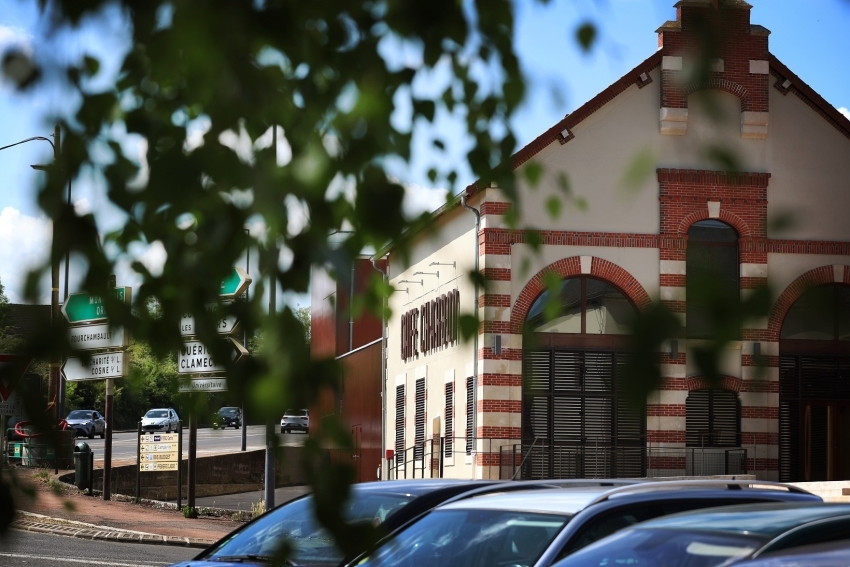 The project involves the redeployment of all the musical activities of Café Charbon in suitable, renovated, resized and functional premises.

The program is developed around 4 activities:

The city of Nevers wished to preserve and develop the musical activity of Café Charbon on its historic site, instead of moving it to an artisanal or peri-urban commercial zone. The place is characterised by a building that served as a warehouse after its construction at the end of the 19th century and has a very beautiful brick and stone facade. Above all it is emblematic as the first rehearsal location for the Tambours du Bronx in the 1980s and later as a production center of world, rock, alternative, traditional and exploratory music.

The project is built on a 3000 m2 plot between the Jean Gautherin cemetery and the Croix Joyeuse roundabout, on a sloping site with a 6m drop.

The project distributes its spaces in several volumes adapted to the slope and borrowing their morphology from the local vocabulary: warehouses, workshops, roof slopes inverted from one building to another, chamfered corners according to the plot, wooden framework. The volumes are detached from each other, offering a good identification, avoiding a large compact block, thus blending in the architecture of Nevers’ suburbs in good proportions.

For financial reasons and in a logic of identity of the place, the project reuses most of the existing buildings:

The project is intended to be functional; spectators are welcomed "at the bottom of the project" from the Croix Joyeuse roundabout and progress in the project from a central gallery where they are offered various alternatives: the Club Room on the left, the Concert Hall opposite, the Partners Room upstairs (soon to be fitted out).

The further we advance, the more spaces are reserved for artists and professionals.

At the other end, in the upper part along the boulevard, we find the supporting functions with a second atrium for administration, reception of artists, reception of equipment and access to the "bowels of the building" ie the ventilation system of the Concert Hall with the impressive dimensions of its ventilation ducts to reduce air circulation noise.

The slope of the land is used in various ways on the project:

The wooden framework forms a link between the general entrance facade to the administration facade via the gallery of the upper terrace.

From his first presentation in the competition phase, the architect proposed the treatment of a disused room above the Club Room. This room now known as the Partners Room will have multiple uses (exhibition, cocktails, dancing, cinema, etc.) and should soon be fitted out.

For economic reasons (initially they were planned to be buried at the top of the site), the rehearsal and recording studios are set up as an outpost of the project, in the rue Mademoiselle Bourgeois’ house which, initially, was to be destroyed as well as the building hosting the ticket office, which was finally renovated.

For its acoustic needs, the building was completely emptied of its contents except for the 4 walls and the roof. As for the Concert Hall, the objective was to be able to play music without noise restriction with regards to the neighbourhood.

Inside we find, from bottom to top, 5 concrete slabs:

Then all the interior acoustic linings and partitions are built on the spring floors without touching the peripheral walls. The acoustic ceilings are suspended from the structural floors by anti-vibration spring hangers. Thus the developed sound waves are absorbed by the inner envelope suspended in the outer envelope (the box within the box).

All the interior finishes - acoustic ceilings and acoustic panels - allow the interior acoustics to be corrected so that there is neither too much reverberation nor too much echo.

The hidden but pre-existing stone columns are preserved. They have been revealed and sanded. They constitute the frame of the small scene with the agreement of the users that this scene is slightly smaller than what was initially requested.

The capacity is 150 people standing.

Exceptional acoustics are the rule: absence of outside noise, sound quality. This room is built on the principles of an acoustic envelope in suspension (see recording studios):

Proportions: this room is intentionally created with a stage almost as big as the hall. The users wanted this because of its programming scale and Nevers’ compact audience so that there is never the impression of an empty room but an intimate atmosphere. In all respects the public will always be close to the stage. The capacity is 400 to 450 people standing or seated.

A complete and easily accessible high technical rigging system adds a real tool at the service of the artists.

The architect wanted to limit the number of colours and materials to reinforce the personality of the project. This design line is also found in the studios.

All of the new walls were made of prefabricated concrete elements, factory produced, then mounted with a crane, including the roof of the Concert Hall. This choice was made for structural, acoustic, economical and aesthetic reasons together with the implementation speed it allowed.

For aesthetic reasons and to avoid a too pronounced standard of prefabrication on the facade, due to a multitude of small panels close together, the prefabricated concrete panels were made in the largest possible widths achievable in the factory, i.e. around 3.50m wide. For reasons of weight, the panels of the Concert Hall were cut in two in their height and staggered.

The coppery red comes from 4 superimposed layers of stain for concrete, each layer allowing the previous layer to show through and giving this vibrant and artisanal aspect of the walls which, with their smooth, sometimes shiny finish, capture and reflect the light of the sky and the city.

I would like to thank the Nevers Agglo team who trusted me for this achievement that was carried out by an architectural firm made of two people, the unfailing support of the future users, as well as the complete dedication of the associated companies, which made it possible, through almost daily on-site contacts, to develop a high-quality project.