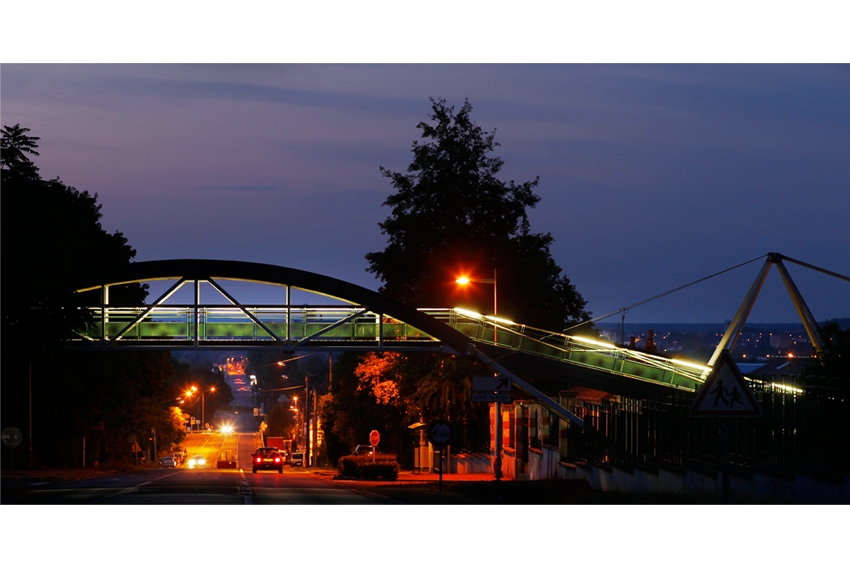 The aim was to link the Challuy agricultural college and the Plagny horticultural high school separated from each other by the N7 highway at the south exit of Nevers. Sharing common accommodation and catering structures, as well as sports facilities these schools had six hundred students crossing the highway every day from one institution to the other.

To ensure a safe pedestrian link between the establishments, an architectural contest for a foot bridge between the two institutions was launched by the Conseil Régional de Bourgogne.

To walk through without (too much) of a break

The footbridge does not cross a ravine, that is to say that we meet here with the cumbersome need to get on a bridge and then to get down.

One of the ineligible answers to the contest could have been the creation of a tunnel for the vehicles, allowing the pedestrian traffic to stay on the same level between the two schools.

The basic idea is of a smooth path, avoiding the basic formula stairway / walkway / stairs (which gives a path type : vertical / horizontal / vertical).

To do this, taking advantage of the ample space available at each end of the walkway, long straight flights of stairs are designed with wide stairways and landings. These allow to climb and descend smoothly in a straight line. The gateway is then turned into a rising and descending path without any breaks.

Being present at the town entrance

Placed on the former south entrance of the city, the aim was, one way or another, to turn this position into a "gate". The general shape of a drawn bow, and an extensive work on the structure ensures that role.

To make the students want to use the gateway

When using the bridge, one enters the structure, one passes through, one brushes it : the idea was to make people want to use it taking advantage of the three-dimensional structure as a spatial experience.

This framework was born from the transformation of a research sketch (an habitable 3D beam) by BC2E research department (including the introduction of reclined elements with optimization efforts).

Integration in the site

The walkway emerges here from a wooded area a bit like an insect and is divided into highs and slopes. Each element is optimized for is role : overhanging or supported, light or heavy section, made of tubes or tie beams. One perceives the structure from the outside.

By day, thanks to the choice of materials and their "natural" processing, the bridge looks as an extension of the space that surrounds it, just as if it had been discovered while clearing the forest.

At night, the lighting enhances certain joints and structural details less noticeable during the day.

From the start and on each side, four anchor points support the access stairs and throw the bridge over the N7 without any support in the public domain. A gauge of 4.40 m for passage under the bridge is achieved above the road.

The whole comes in 3 sequences (oblique / horizontal / oblique) of 18.50m equating to 55.50m. In the general perception, the flights are extended by the arch of the bridge continuity.

The central part of the bridge consists of two glued laminated timber (glulam) arches underpinned by a metal frame to avoid too long sections of timber and support the deck. The arches are Class 2, protected from the weather by cleats to avoid maintenance. A metallic band protects the top of each arc.

The stairs stringers are made of glulam Douglas, Class 3. The top of the stairs is made of a 40 to 50mm thick rot proof ipe wood, and has integrated non-slip bands.

The flights of stairs are supported by a metal structure, starting from the bridge, consisting of triangulated tubes which are inclined towards each other, providing stability and supporting the access ramps. This structure is equipped with additional shrouds to ensure a perfect triangulation. It is fully galvanized to avoid maintenance afterwards.

A railing of pre-painted steel is fixed on the stairs stringers wooden frame. A continuous lighting is integrated into the smooth guard-rail.