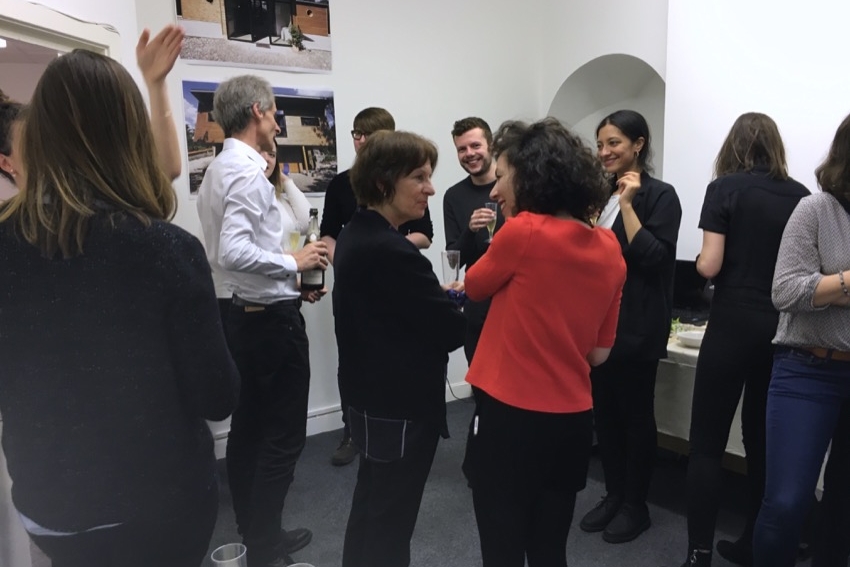 Before the end of the inauguration, Elsa reminded me to do a little speech…(thank you Elsa). I did my speech and… I wrote it after !

A few years ago I started to be interested in stars and planets. I bought a telescope and it allowed me to watch the sky as soon as it was clear. I was very impressed by what I saw and I seriously thought that I would enjoy to go and visit Jupiter (or March or other planets). But a little voice in myself told me : “begin by UK, it is the first step !” So I could appreciate the height of the step. And I did begin…

One of the first reasons I decided to move to UK is the possibility for me to discover something new about myself that I completely ignore today. I believe that in a new context one’s production has many chances to be different. For instance, living in Copenhagen would give something different than working in Nevers. Because of that, I moved my body. And I’m now like a seafarer in the middle of the ocean, still not seeing the coast…

Of course the bad economical context in Nevers where I currently work is helping me taking this decision : building regulations are increasing as much as building constructions are slowing down. But still going on with Nevers’ office that I have managed for more than 20 years, I think that moving back and forth between the two countries could be a good feed back for Nevers. We’ll see…

The strange thing is that today I feel like a beginner in spite of my background : architecture is a sequence of stages which are here different from France. If I had been a violinist I would just have had to find places to play or to perform concerts. The practice of architecture is more sophisticated. Because of that I did this reception to thank people who are helping me from the beginning, and in a different way : my wife, Maryline, always present to support my projects, currently applying in London as a French teacher in different schools, my daughter Elsa who does architecture in New-York (she helped me a lot to organize this reception), my daughter Barbara journalist in Lyon, France. Christine, a draftwomen, working with me since 1999 : she put up with me during all those years ! A very involved person. Anne-Lise, a talented young architect who has been working with me for more than 2 years, deeply committed in her work and with whom I share conception – I can testify that it is not so easy with employees but perhaps both of us were ready. Imane, Sebastien, two French architects who left France a few years ago and are now working in big architecture firms in London. They answered my questions and advised me about how architecture works in London. Juliette my cousin, and Amelle a friend who arrived in London several months before me and indicated me where to search, and where to buy the little things of the daily life Greg, a warm and intelligent architect who guided me (with Jack another architect) where to knock on the door, who to write to … and with whom I visited an amazing building site and with whom I still often meet around a beer in a sweet place in Sloan Square. Mathilde and Micheal, supportive friends from the beginning. Plus Elsa’s architect’s friends (Arthur, Josepha – from Norman Foster , Cecile from East) Stephan, from Rag & Bone, London, (he moved from New-York) and with whom I had an interesting conversation about creation

I do warmly thank all of you to be here. I know as a lesson of life that abroad nothing can be undertaken without a help. Thank you.